This must start from the start of him. Of when he walked on stage. This dense waft he suggests with his slouched shoulders wearing heavy. Eyes peeled back. Suit is old. Wrinkled. I wonder if he drove to Melbourne in it. One button done. Hurtsville t-shirt beneath the rags, little stain too. On Triple R just two nights ago I heard his Formative 5. Beautiful selection. Con 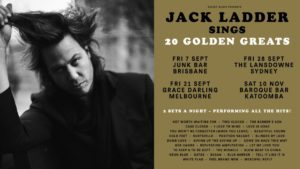 sidered. But by now I’ve already considered him a considered man. Boy in haggardly body and bushy straw hair. Aging well compared to Bukowski, aging well in humour, aging well in demeanour. A child is prominent in his tort smile, and especially when he fights off a laugh like an SNL actor breaking character. I guess now, I have to go back to when I first saw him enter the Grace Darling Hotel. He looked awkward and off. Slightly lonely in a very comfortable sense. I get a rising fanboy feeling that sickens the sweet love at my side. But his swoon is difficult to combat. He represents defeat in the most romantic manner. Such a feeling is relatable to all men, all good man at least. I stand by that.

I bought a fucking peach coloured Hurstville long sleeve. My Centrelink came through with Austudy back-pay. $2000, so I paid my white dust dealer off $1000 finally, and spent freely this night on my lover, enjoying the drawl of Jack Ladder. So, back to his on-stage hue. He was the opening act for himself and did an alright job. As a member of the crowd, I can say with vindication, that I felt well prepared for the final act. His first ten were all played on his electric guitar, salami fingers prodding the strings and baritone lungs thudding through my ears and chest. He was swimming with no shoreline. Out of business or something, I dunno. But he carried well. Carried this singing guitar playing thing well, and girls near me giggled with hardened nipples, at least that what their voices conveyed. Hard nipples. Probably good girls.

The little caveats for his songs were heartfelt, and bumpy. It was like riding in the car with dad, but you’re young and haven’t yet learned to resent him. Later you resent him for your own failures and he resents you back for his. Jack Ladder is somewhere in between the second part and plays the role of his own dad somehow. I wonder how tall his father is… maybe he is short and his mother is 7 foot. I do hope that’s the case. Jack Ladder and his tiny father riding in a car. I digress… He sang with his quivering soul a lonely slow drip of honesty. But his honesty only lasted as Jack Ladder ‘the opening act’. He was a conniving liar the whole second half and I fell in love with him all over again for it. But I digress…

He befell mischief upon the audience like a slow-dancing wizard. Looking around in ecstatic glee I found most faces to be taking his boyhood cheek with absolute sincerity. They looked through his subtle authenticity, the way he knew that he was honest and fibbing at once, they swayed mesmerized by each flick of his fingers and swift bow of the neck in rhythm to his sad solitude. A pantomime of humble proportions on a justice scale form a medicine draw.

Jack Ladder serenaded us, as well as himself, cataract sunglasses singing Iggy Pop in a crowded karaoke room of his fans. It was beyond surreal and felt as though he was a 3D image of himself in a distant future singing in some transient worldwide eulogy to his deceased self. Magnificence doesn’t cut the profound genius he exuded. The love for Leonard Cohen he mentioned on Triple R the other day burned a trail of sense. It was all clear now under the red blue lights and certainty in self-doubt. He ended with Dumb Love as did I. xx